Email ThisBlogThis!Share to TwitterShare to FacebookShare to Pinterest
Labels: NMRA 2012 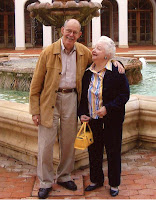 Master Model Railroader #401, Bill McMillan peacefully joined his beloved wife Carola on July 24, 2012.  He was a retired Congressional Liaison for the Department of the Navy yet continued working as a private consultant to the department and pursuing his love of model railroading.  Bill was a long time member of the NMRA, active in the MER and James River Division, the James River Division On30 Modular group, the Ma & Pa Historical Society and various local groups.  He is survived by his son, Artie McMillan; his daughter Sue McMillan; and his two granddaughters, Alex and Tyler McMillan.  Bill was 85 years of age.

Among his many model railroad accomplishments, he was most proud to obtain his MMR certificate on September 21, 2007.  He was a superb modeler as witnessed by his beautiful HO scale Ma & Pa layout of the Maryland District set in October 1939 between Baltimore, Maryland and Delta, Pennsylvania with staging into York Pennsylvania.  The layout was fully sceniced and operational with a new Dallastown branch nearing completion.  Bill’s Ma & Pa was regularly operated by a devoted group of operators who also volunteered many hours towards construction and maintenance efforts becoming a part of the layout.

The family graciously allowed a small group of the Ma & Pa operators to visit Saturday July 28 to operate the layout one last time as a tribute to its Chief Operating Officer and creator.  Two “sweeper trains” were run, much like the prototype railroad ran upon its discontinuation of service, to clean out all the sidings and towns.  A final train was run out of Baltimore to Delta with lone Ma & Pa  2-8-0 #41, a Baldwin locomotive built in 1941, pulling coach #20 as the McMillan Memorial Special carrying its fallen leader.  The Special stopped at every station along the line for mourners to pay their last respects.

As a fitting farewell to Bill, the following poem is repeated from the memorial service bulletin.

The railroad track is miles away,
And the day is loud with voices speaking,
Yet there isn’t a train goes by all day,
But I hear its whistle shrieking.

All night there isn’t a train goes by,
Though the night is still for sleep and dreaming,
But I see its cinders red on the sky,
And hear its engine steaming.

My heart is warm with the friends I make,
And better friends I’ll not be knowing,
Yet there isn’t a train I wouldn’t take,
No matter where it’s going.

The model railroading hobby has lost a valued friend and mentor.  He will be greatly missed.

It is with great sadness that this information must be shared.  On Tuesday, July 24, the hobby lost a valued friend and mentor.  Mr. William "Bill" McMillan ended his journey on earth at the age of 85.  Bill was an avid HO scale model railroader building his Ma & Pa layout and an On30 module, both to the highest degree, helping him to earn MMR status.  Bill will be greatly missed by many.
A memorial service will be held on Friday, July 27th at 4pm at The Episcopal Church of the Redeemer, 2341 Winterfield Rd, Midlothian, VA 23113.  A celebration (with BBQ!) following the service will be held at his home at 3608 Rivermist Ct, Midlothian, VA 23113.  All are invited.
To help with arrangements it would be appreciated if those who plan to attend please provide an email RSVP to preferably Ken Montero at va661midlo@comcast.net or myself at mgarber819@verizon.net .  Please do not respond to this message.
My apologies to those who receive this message multiple times.  Please share this message with others in an effort to share this news.

With all sadness,
Mike Garber
Midlothian, VA
By Drphilster - July 25, 2012 No comments:

Email ThisBlogThis!Share to TwitterShare to FacebookShare to Pinterest
Labels: McMillan MMR On30

The revision to the web site is now underway.  The home page has a new look though the ads from Trainweb which help to support the site keep overlapping the division map.  Hopefully, experimentation will yield a fix.  The current goal after fixing the main page is to add one new page every two weeks to flesh out the web site.  Of course, that is dependent on content from those who whose area is covered by that page.  Those responsible for areas will be asked for content and if none arrives the webmaster will make his best guess.
By Drphilster - July 18, 2012 1 comment:

Chance to hear Mark Chase on Modeling a Soapstone Railroad

Those of you who missed Mark Chase's presentation on Modeling a Soapstone Railroad at the last JRD meet will have the opportunity to hear him again.  Mark will be speaking at the NRHS Rivanna Chapter meeting in Charlottesville on Tuesday July 17, 2012 at 7 PM.   The meeting is held at the Elks Lodge in Charlottesville.  A buffet dinner is optionally available at 6 PM for $14 during which Mark will have a slide show running.

Summary: We are fortunate to have here in Central Virginia such a diverse and interesting railroad heritage to provide inspiration for our railfanning and modeling. An example would be the unique and picturesque operations of the railroads that once served the soapstone industry in Albemarle and Nelson counties. My program examines Alberene Soapstone Company from the perspective of a model railroader searching for an engaging theme for a new model railroad.

JRD Member Keith Stillman has OPSIG article of the Quarter


The article describing demand driven ops was published in the most recent OPSIG issue and is now free on their website as the article of the quarter.

http://www.opsig.org/doff/aotq.shtml
One of the charts is wrong in the article and the corrected one is available here.
http://eastonpotomac.blogspot.com/search?updated-max=2012-06-21T15:45:00-04:00
The system generally works well and traffic is never uniform.
Main site is http://www.easton-and-potomac.com

Welcome to the blog for the James River Division, MER, NMRA.  It is hoped that this blog will lead to more timely communication of material.  The combination of multiple means of communication will be used to reach our membership.  The blog is not the be all/ end all but only a part of the whole process.  We may experiment with other means of communication to make sure members can receive the information they need in a way that meets their needs.  Welcome!
By Drphilster - July 03, 2012 1 comment: