Yes folks we have a Facebook group. It came to be after much delay about a week ago.  There are already over a dozen members whom include many folks on our Yahoo Group.  Each of these are different avenues to the same end.  We wish to build community for Model Railroaders in the James River Division.  Many will participate in one or even both.  Hopefully the Facebook group will open us up to others who would not find us otherwise.  Come join us and explore Model Railroading.
By Drphilster - April 28, 2014 No comments:

The Potomac Division will a mini-con next month in Annandale.  There is a meeting fee but it looks to have several good speakers and interesting topics.

See the website for more details.
By Drphilster - April 22, 2014 No comments:

Meeting Goals for the next 2 years

Starting in July 2014 and going through June 2016 I hope to have 5 meetings in the July 2014 - June 2015 year and the same in the July 2015 - June 2016 year of the JRD.  These will be distributed geographically with 2 in Richmond, 1 in Charlottesville/Lake Monticello, 1 in Lynchburg and 1 in Fredericksburg/North of Richmond.  These should allow us to roughly mirror the geographic distribution of the JRD with a goal of raising participation in each area.  I will try to schedule around other events that tap into our active membership with a stated goal of the 2nd Saturday for a meeting day.

If you have thoughts or ideas about where we should meet including particular dates in particular locations, facilities, topics, clinics and contests please let me know soon.

The Tidewater Division is holding their June 21st meeting at the Army Transportation Museum on Fort Eustis again this year.  The meeting will start at 10 AM.  We would like to invite the members of your Division to join us.  The clinic will be presented by one of our members, and as before we are arranging a tour of the museum and the train yard there.  We hope you folks can join us.

The JRD had a small but interested crowd in Lynchburg for a meeting.  Landon gave a clinic on how to add water quickly and very inexpensively to a layout for use with a moveable barge. 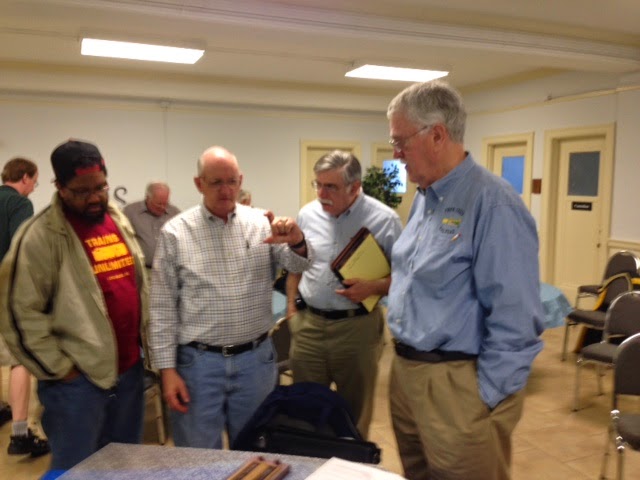 After the Clinic elections were held for the July 2014 to June 2016 term
with the following elected to serve: