More on innovation in the hobby

Trevor Marshall posted more on one of the more interesting throttles which is due out early next year.

We hear so much about the hobby as aging and not appealing to the youth. Today at an operations session of a large layout we having a good time with the normal issues of crowded tracks or aisles and the normal couplers that adjustment.  Several of our operators were under 30 with one under 18.  This is a good sign and one I hope will be repeated in many places.

One way we can interest young people is moving forward with the new and not focusing on the past.  We can seek new ways that interest them and relates to their world. It is known that most young people (and many others) exist on their smart phones. Today at the ops session mentioned in the first paragraph the owner of the Western Maryland (Moseley Subdivision) after the session settled down and was running smoothly allowed me to setup the new Digitrax LNWI.  The setup took less than a minute and it is prime example of how simple things should be to operate on a model railroad. 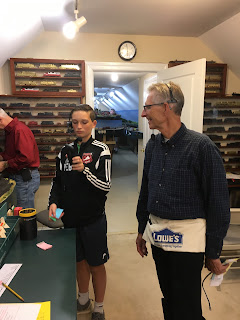 Once the setup was done and the new wifi device connected to by my iPhone I was operating my locomotive bidirectionally with quicker response than with my older simplex throttle.  Once news filtered out our youngest operator Paul with obvious enthusiasm was asking if he could use his WiThrottle. Moment later he was operating his locomotive with WiThrottle and showing others how well the WiThrottle worked over the Digitrax LNWI.  If we want more young people in the hobby then we need hit their excitement points since they are the ones who will excite their peers on how much fun is Model Railroading.

(There will be a review of the Digitrax LNWI in a future Crossties)
By Drphilster - October 28, 2017 No comments:

November Get Together at Cardboard Safari

We will have a clinic which include a demosltration of laser cutting of a structure and module/LDE benchwork. Second clinic is unamed as of yet. Our tour will be of Bob Macionis Layout which is a basement filling layout which will be torn down and a new one built shortly after our gatherning. Plans of the new layout will be on display