Model Railroading Down on the Peninsula


Model Railroading Down on the Peninsula.

On Saturday June 15th, the NMRA Tidewater Division meeting was held at the United States Army Transportation Museum at Fort Eustis in Newport News, Virginia.  The Tidewater group was gracious enough to sponsor this get together as a joint meeting with the James River Division (JRD) to foster camaraderie among neighboring NMRA groups. Of the approximately thirty-five attendees fifteen were JRD members from Charlottesville and Richmond (unfortunately no JRD officers were able to attend). 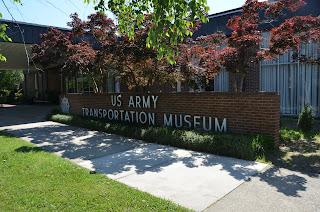 Fort Eustis is of course known in model railroading circles because it is where generations of Army personnel have learned railroad operations for domestic and overseas military activities. Founded in March 7, 1918 for the military build up presaging America’s late entry into World War I, Camp Abraham Eustis became Fort Eustis, a permanent military installation, in 1923.  Today this post, along with its satellite installation Fort Story, is home to the U.S. Army Transportation Corps, the U.S. Army Transportation Center, and the U.S. Army Transportation School, among others. Because of these training facilities Fort Eustis still contains some complex operational railroad infrastructure. In 2010, the facility was combined with Langley Air Force base to form Joint Base Langley-Eustis.

The Army Transportation Museum is a wonderful place to host a model railroad meet because the displays examine the evolution of military transportation and logistics from the American Revolution to the present day. We were allowed free access to the museum displays both inside and out. The museum has a newly rebuilt outside display of various military locomotives and rolling stock which date back to World War I. Unfortunately the scheduled clinician was forced to cancel at the last moment. This turned out fine because it allowed more time for a special guided tour of a private railcar at the museum that is not open to the general public. In addition, a museum employee took visitor’s to the fort’s locomotive facility (which is normally off limits) and not only fired up an Army GP10 (a rebuilt GP9) but was nice enough to pull the valve covers so those in attendance could witness the working valve train. This back stage pass to see prototype military railroading made this visit to Fort Eustis a real winner. Speaking of winning… the JRD made out well during the popular vote contest involving railroad photography. Former JRD member Howard Heltman who was in town visiting from Pennsylvania, was awarded first place for prototype photos. Much to my great surprise, I somehow took first place for model photos
In lieu of lunch I went over to photograph the former C&O station at nearby Lee Hall. That building, which has seen better days, has been moved across the CSX mainline tracks and is now undergoing an exhaustive and expensive restoration ( www.leehalldepot.org ).

As if the prototype offerings at the museum were not enough, the Tidewater Division had club and home layout tours arranged and open all the way from the Chesapeake Bay & Western club layout  (www.cbw-mrc.com ) in Yorktown, the Tidewater Modular Railroad Club ( www.tmrctd.org ) in Virginia Beach, and five homes layouts in Ford’s Colony in nearby Williamsburg.


My first visit was to 2600 square foot walk in basement of Pennsylvania Railroad modeler Ed Rappe. Mr. Rappe is building a multi-deck/mushroom O-scale (2 rail) representation of mainline and branch line operations from Altoona to Gallitizen in 1952. Big Pennsy steam along with Centipedes and multiple lash-up diesels pull 30 car freights and passenger trains along 64-inch minimum radius super elevated curves. The beautifully designed and executed layout features wireless walk around DCC, 118 turnouts, a massive engine terminal and roundhouse complex, ceiling suspended hidden staging, hidden lower staging  (all layout staging uses video cameras that allow operators to follow their “out of sight” trains) and a very realistic recreation of Horseshoe Curve that not surprisingly includes all four tracks. All turnouts are hand laid and built to fit which enhances the overall layout symmetry. Photos of the layout do not do justice to its size and its meticulous level of design and craftsmanship. All in all, Mr. Rappe is well on his way to building one of the finest layouts in the country.


As if that was not enough Pennsy Power for Williamsburg, or even for the immediate neighborhood, upon leaving the Rappe layout I drove a few blocks to Jim Taverna’s 1700 square foot basement which houses the Susquehanna Division of the Pennsylvania Railroad in 1955/56 also in O-scale [2 rail] (http:/ www.prr-northerncentral.blogspot.com ). While not as far along scenery wise, Mr. Taverna’s layout features a fully operational double track main line, a large yard at Northumberland which is not yet completed, and a very steep coal branch line that climbs to ceiling heights at Mt. Carmel. The layout employs wireless DC throttles and has an eight-track double ended holding yard beneath the main yard for staging. The layout features 62-inch minimum radius curves and 1.75% grades on the main in contrast with 52-inch radius and 2.5 % grades on the branch line. Another interesting feature is the use of leased steam power from the Reading, RF&P, and AT&SF per prototype practice.


My final stop was Jack Brown’s 26 x 20 foot HO Western Maryland Railway that models the Appalachian region between Cumberland, Maryland and Ridgeley, West Virginia. Mr. Brown and his wife Barbara have authored many model railroad articles in addition to the book Western Maryland Color Guide to Freight and Passenger Equipment. The railroad takes full advantage of their prototype expertise and features the colorful WM diesels and recreations of the shop and yard complex at Hagerstown in the period between 1969-1974. The layout features code 83, 70, and 55 rail along with DC wiring and hand held wireless throttles. Aside from the fine mountain scenery the layout includes a number of scratch built WM buildings including the Ridgeley sand tower. Mr. Brown’s WM was a great layout to visit and a wonderful place to close out a fine day of model railroading before a fine meal in downtown Williamsburg.

My only regret was not having the time to visit the two other home layouts on tour. Gale Treiber’s is building the HO Cement Belt Railroad above his garage, a model railroad that replicates operations in a valley northwest of Allentown, Pennsylvania. In addition Hans Schwartz is constructing a free-lanced N scale layout based on Atlantic Coast Line operations between Richmond, Virginia and Charleston South Carolina in a 19 x 3 foot space. For details please go to Mr. Schwartz’s blog at www.aclinn.blogspot.com .

I had a wonderful time and hopefully we can return the favor and invite these fine people up to our division sometime in the future. As for me, I will be filling in as a guest blogger again next month and reporting in from my adventures at the NMRA National Convention in Atlanta, Georgia.

Gerry may be reached at  gfitzgerald111@gmail.com