The Civil War Roadshow came to Charlottesville on August 11th thanks to the Bernie Kempinski and Gerry Fitzgerald.  The JRD was invited to the home of Gerry Fitzgerald and Gabriella Petrick where there was not only a world class layout but a delicious spread of summer food. 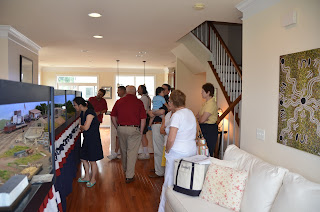 The roadshow was most recently featured at the NMRA National in Atlanta.  A most appropriate venue for a Civil War Roadshow.  The Roadshow is scheduled for several other appearances later this year.  Stay tuned for more news as it becomes available. 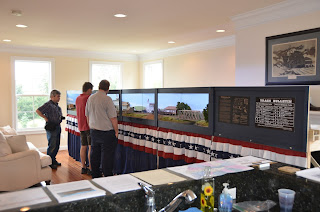 So Charlottesville was for a few hours occupied again by Union forces commanded by our two intrepid builders.  The level of workmanship on the modules is museum grade.  There is always a new previously unseen detail when looking over a scene each successive time. 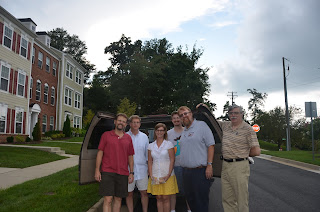 The display broke down in a few minutes and Bernie Kempinski was able to load his sections in the back of his vehicle.  Pictured above is the loading crew (from left) of Bernie, Gerry, Gabriella, Rick, Phil and Ken (who also manned the door as greeter).

Thanks to everyone who made the day great for the approximately 26 visitors.